Education is critical to poverty reduction and to improve education, initiatives usually start at school level. The analysis of school performance is a major concern for many governments around the world. Maps can be used to understand spatial relationships across areas and regions. Using these available maps from OpenStreetMap and the results from each school, school performance can be analysed in relation to spatial measures. The spatial measures include related data such as roads, rivers and economic centres.

The school results determine the performance of each school in the region, the data can be obtained from the Ministry of Education and integrated to the spatial data for conducting the analysis.

The school performance has been believed to be affected by various factors including the inadequate number of schools, facilities and teachers in relation to the eligible number of students. This is true especially in urban areas where there is a high concentration of people. The lack of digital maps to show the relationship between the students’ needs and what is currently available in terms of schools and other facilities, sometimes result in poor plan in expanding current schools, suggesting sites for new schools in the study area and also for students and resources location.

The use and adoption of Global Positioning System (GPS) makes it easy to obtain the coordinates of the schools and plot on the areas base map. Other data pertaining to students’ results and schools can be sourced from the records of the various schools.

Zanzibar schools perform very poorly and according to the data obtained from the National Examination Council of Tanzania (NECTA), schools based in Zanzibar have dominated the list of the five worst performing schools during the 2014-2018 academic years. The performance varies in different regions, in the academic year 2018 Zanzibar West, North Pemba and South Pemba were the three last ranked regions. Since OSM is used as a source of various spatial data, the school’s information should be uploaded with the collected attributes (set as map features in the OSM). 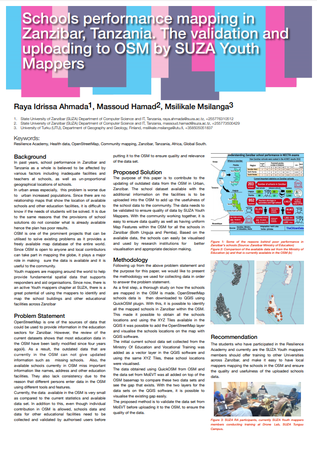